The fight to end human trafficking is a year-round fight. The month of January is recognized as National Human Trafficking Prevention Month. But to elevate the fight even more, January 11th is #WearBlueDay. The yearly event is an opportunity to take action against human trafficking and raise awareness about this persistent issue by educating the public and focusing on preventing this illegal practice.

Human trafficking is a form of modern-day slavery. It is a crime that involves recruiting, harboring, or transporting people through force, fraud, or coercion for sexual and/or labor exploitation. It can happen to anyone. However, specific individuals are more at-risk than others. Critical risk factors include immigration status or displacement, substance use, mental health issues, or houselessness. In most instances, predators identify and leverage their victims’ vulnerabilities to create a sense of dependency.

Contrary to popular belief, human trafficking occurs within the United States. The Department of Justice reported that 94% of sex trafficking victims are female, 40% are Black, and 24% are Latinx. In 2021, 10,360 cases of human trafficking were reported to the U.S. National Human Trafficking Hotline, involving 16,710 individual victims. In 2018, the Global Slavery Index said that an estimated 403,000 individuals were trafficked in the United States. In recent years awareness and education around this issue have grown. Still, human trafficking is considerably underreported due to its clandestine-like nature, lack of local attention, ineffective law enforcement, inadequate resources for victims, and social stigmas.

In the U.S., the campaign #WeWearBlue was created, and all you have to do is wear something blue — an item of clothing, an accessory, or a ribbon. Blue is used because it is the international color of human trafficking awareness. It is encouraged to take photos of yourself, friends, family, and colleagues wearing blue clothing and share them on social media along with the #WearBlueDay hashtag.

Los Angeles County is a point of entry into the United States for victims of trafficking. This is due in part to the large homeless youth populations, close distance to international borders, in addition to busy ports and various airports across the region, a significant immigrant population, and industries that attract forced labor and sex trafficking. 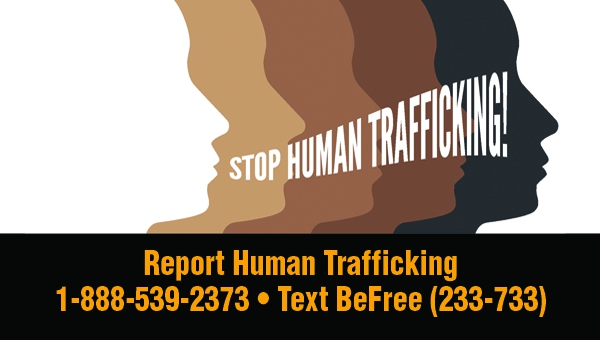 AB 1788 –  sex trafficking penalties make hotels subject to civil penalties if a supervisory employee knew or acted with reckless disregard of sex trafficking activity within the hotel and failed to inform law enforcement, the National Human Trafficking Hotline, or another appropriate victim service organization.
AB 1661 – would require airports and bus stations, as well as beauty, hair, and nail salons, to post information on human trafficking and how to get help.